The Constellations for Leadership & Change Program

;
Is it time you became the leader you should be, without having to fight for the change that needs to happen, without taking a training that isn’t relevant to your work and without using the same old tired techniques? Then read on.

THIS PROGRAM IS RIGHT FOR YOU IF YOU ARE:


A HR or OD professional working with leadership development, culture change and change processes

An Executive or Business Coach supporting leaders in how to lead more effectively

A Leader or Executive in charge of a transformational or right-sizing program
h
A Management Consultant helping organisations grow and develop

A Leadership Facilitator or Trainer working with leaders to develop their capacity to lead in times of change

A Counsellor, Therapist or Life Coach working with individuals who want to increase their career success
Are you fed up with change processes that promise the world but seem to make everything worse?

Are you tired of leadership trainings that focus on the individual so when the leader comes back to the office, they either can’t use what they have learned, because the organisation didn’t change or they leave, because they have changed so much they no longer fit in?

Would you like to find a way to lead change that is simple, makes sense with the way human beings are wired and is super effective?

CONSTE-WHAT? IS IT SOMETHING TO DO WITH THE STARS?

Well not exactly. But we look at the constellations you appear in, like your team, your peer group, the leadership, your current family and the family you grew up in.

WHY IS THIS IS IMPORTANT?

Although we have been cultivating individualism for many decades, the truth is, as human beings we’re wired to belong as part of a system. Our human survival has been dependent on us having a safe space in a group, family, tribe. And that wiring is at least 200.000 years old (some will say millions depending on when you think humans were created).

So even though we can now put on a suit, show up in an organisation and pretend not to get impacted by those around us, we are!

The Constellations approach looks at situations and challenges in a wider context. We don’t just focus on the symptoms. We examine the bigger field of connections. The pattern the leader is stuck in might come from their personal background or could belong to the organizational culture and history. The challenges in the marketing team might stem from the unfair dismissal of their previous manager.

ORGANISATIONS ARE SYSTEMS WITH THEIR OWN SYSTEM DYNAMICS. AND IF YOU WANT ORGANISATIONS THAT ARE SUCCESSFUL LONG-TERM BOTH ON THE PEOPLE- AND PROFIT-LEVEL YOU NEED TO ATTEND TO THOSE DYNAMICS.

I’VE CREATED A 5-PART TRAINING PROGRAM TO TEACH YOU HOW TO USE THE POWER OF CONSTELLATIONS TO CREATE POWERFUL CHANGE WITHIN YOUR ROLE, ORGANISATION OR CLIENT ORGANISATION. 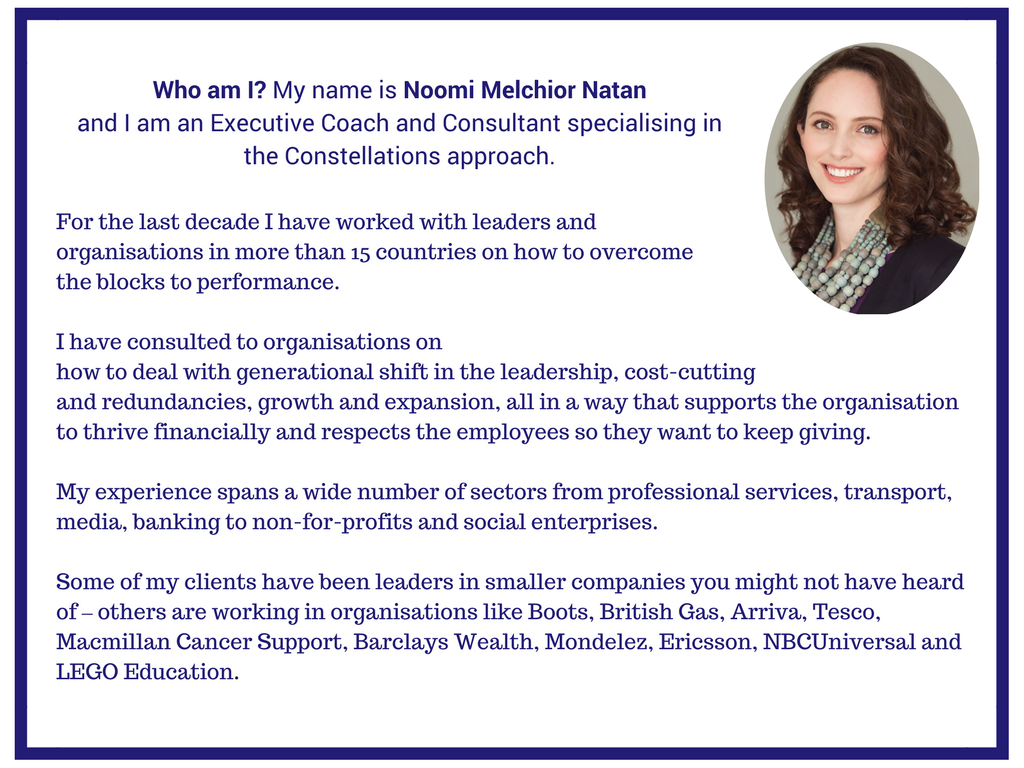 THE CONSTELLATIONS FOR LEADERSHIP & CHANGE PROGRAM:

This is what’s included in The Constellations for Leadership & Change Program:
N
5 modules each with 3 video lessons. Each module totals 40-90 minutes
N
Full access to all 5 modules straight away, so you can go to specific modules to solve an urgent challenge
N
Freedom to go through the Program at the pace that is right for you – quick and intensive over a few days or taking up to one month to apply and digest each module
N
A workbook to support your learning to help you make the most of the Program
N
Possibility to upgrade for 1:1 support if you don’t want to go-it-alone and prefer personalised coaching 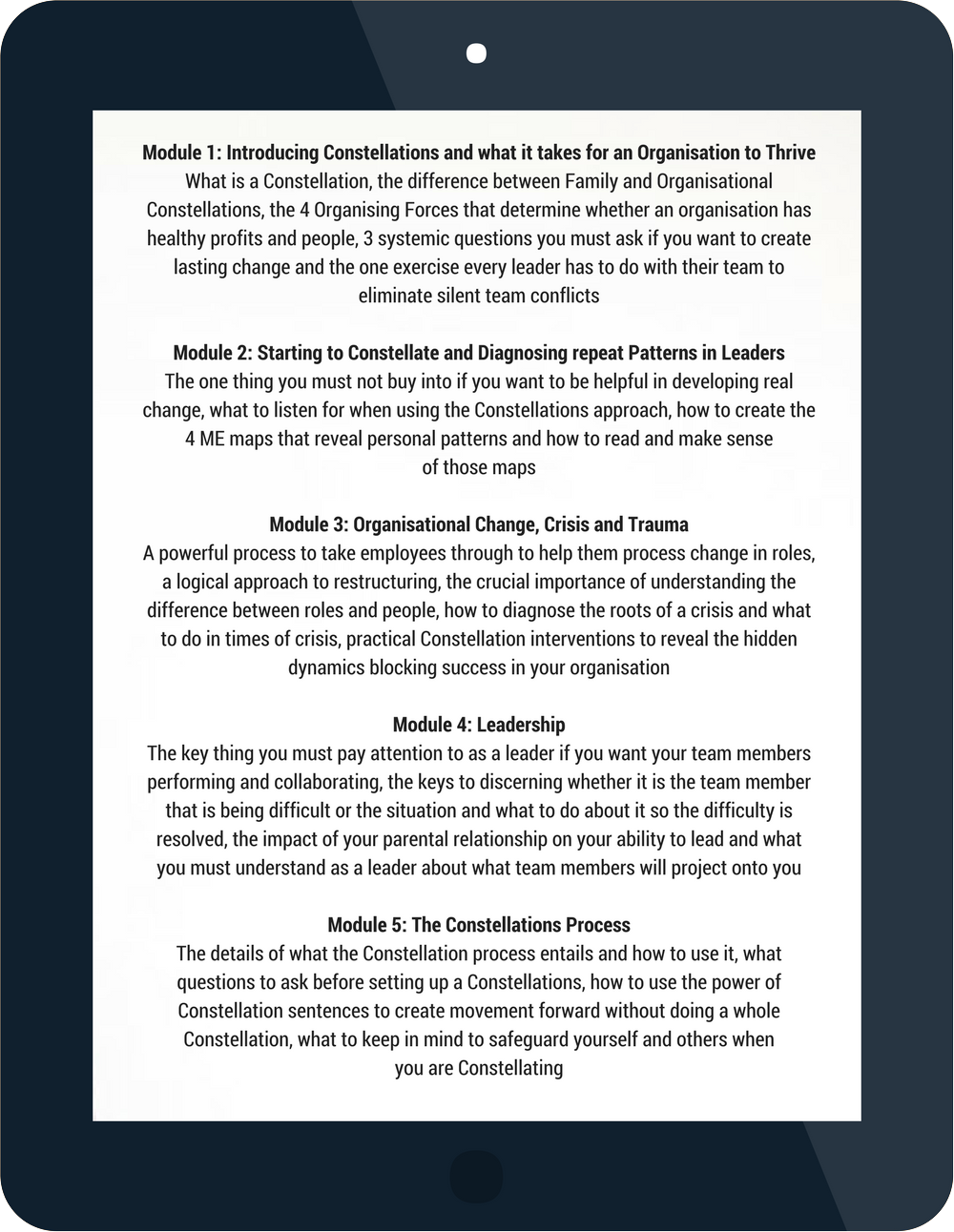 Go Here to Buy the Program
I can’t speak highly enough of constellations as an approach and of Noomi as a constellations coach and teacher. I no longer am hindered by my pattern, stressed and exhausted.
JANICE PRESTON

What if I have already trained in Family Constellations – is this still right for me? Yes, if you want to learn how to successfully use the Constellation approach in an organisational context whether that be in 1:1 work or with larger groups

Do I have to watch all the modules in order? The information does build, but you can absolutely jump to the lessons that speak to what you need now

What if I need help on how to apply it within my organisation, leadership, client situations? You can upgrade to 1:1 sessions with me. The sessions will be via video call so you can be anywhere in the world. Email me at noomi@noominatan.com to apply for 1:1 coaching.

Do you offer refunds? I don’t offer refunds? I have laid out what the course entails and you can join the free trial here to see if you like it. Still in doubt, just email me your questions to noomi@noominatan.com

I found the video lessons both informative and practical. Noomi provides a clear framework which helps people look at their own patterns, and to also start to understand how you might seek to create a shift in some of the systems that you are part of. For leaders it challenges some of the conventional wisdom and provides some different clues as to how to create greater coherence and vitality within an organisational context.
MIKE JONES

I would strongly encourage all who work with Noomi to take up this opportunity as what you get out of this is beyond description. Suffice to say I have worked with many coaches but no one compares to Noomi and her work using constellations.
JACKY GRIFFITHS

Imagine getting buy-in from all levels of employees and creating change initiatives that can actually be digested and implemented successfully.

Imagine having the keys to getting a team performing and to getting the “see-me, see-me” people become team players, so you can stop wasting energy on internal team conflicts and start creating the results that are needed.

This Program is not based on another man-made model.

It’s a way of approaching leadership development and change in organisations that works with the way humans are naturally wired.

Not only does it makes sense, it also helps organisations and people perform better.